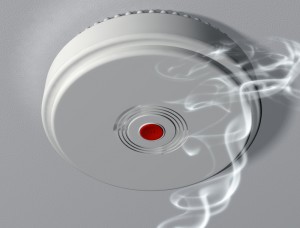 According to the U.S. Fire Administration, the number of fires in residential dwellings (one and two-family homes, apartment buildings, hotels and other boarding facilities) in 2007 was 414,000 – an increase of approximately 9.2% from 1998. During the same period, the direct dollar property losses   nearly doubled, going from $4.4 billion to over $7.5 billion.

It is worth noting however that the number of fire deaths and injuries over this same nine-year period have generally decreased; overall, these figures have declined by approximately 8.3%. Still, there were 2,895 deaths and 14,000 fire-related injuries during 2007.

The decline in the death and injury rate can be attributed to better fire alarm system monitoring technology, and points up the importance of such technology in your home. Although most of us use reasonable caution, home fires have been known to start from all sorts of causes – including short circuits in the defective wiring of the inferior appliances now manufactured in substandard facilities in China and Mexico. In fact, older televisions can be turned off and unplugged and still cause fires for up to 24 hours because of electrical energy stored in the transducer; in 2006, a number of Chinese-manufactured Dell laptops mysteriously exploded for no apparent reason.

When we are asleep, our senses are asleep as well; therefore, it is possible to burn alive (though asphyxiation usually occurs first – mercifully) without ever being aware of it.

Because heat, which rises and gathers toward the ceiling, is the first warning sign of a fire, a good fire alarm monitoring system should have heat detection sensors as well as smoke detection sensors. Ideally, these are mechanical and not electronic in nature, since a building fire can put the electrical system out of commission in short order. Otherwise, your heat and smoke detection systems, if hard-wired in to the home electrical system, must have battery backup; this battery should be replaced at least once every year.

Of course, heat sensors and smoke detectors are only one element of fire safety. Fire extinguishers should be kept charged and ready in the kitchen, the workshop and anywhere else a fire is likely to occur.  It’s also important to be familiar with all routes exiting the building as well as to have an escape plan. Be certain that you and all the members of the family are familiar with how to get out of the house and have a pre-arranged meeting place, should the worst happen.

*Next day home alarm system installation subject to availability in your area. $99.00 Customer Installation Charge. 36-Month Monitoring Agreement required at $36.99 per month ($1,331.64). Form of payment must be by credit card or electronic charge to your checking or savings account. Offer applies to homeowners only. Local permit fees may be required. Satisfactory credit history required. Certain restrictions may apply. Offer valid for new ADT Authorized Dealer customers only and not on purchases from ADT LLC. Other rate plans available. Cannot be combined with any other offer.

Actual alarm systems may vary from items pictured.Your Privacy Matters To Us! - By submitting this form, you are requesting more information via phone and/or email. We will call via the information provided regardless of status on the do not call or email list. You are under no obligation to make a purchase. Your information is secured and absolutely private.